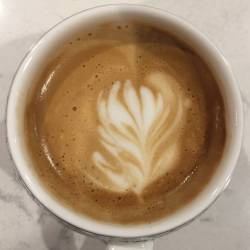 Even though I’ve made thousands of lattes over the past 25 years, both for myself and for others, I’ve never come close to mastering latte art. Some days as I pour the velvety-smooth milk over the espresso, it takes on the pattern of a delicate flower or a rippled heart. Other days it plops in there like a big blob, and no amount of squinting or imagination can conjure a recognizable shape out of it. A couple years ago I decided to take a picture of each morning latte for a hundred days in a row, hoping that the act of keeping a record of it would work some psychological magic on me, force me to slow down and think about the process, foster some kind of consistency, and maybe, just maybe, lead me to latte art mastery.

It’s not like the goal was unachievable. Plenty of baristas around town here and elsewhere create perfect rosette after perfect rosette for their adoring customers. I couldn’t blame my equipment, either. After Sara and I (along with our friends) sold our coffee house, we realized there was no going back to those anemic little espresso machines and grinders. Instead, we sprang for a small yet powerful machine with a heat exchanger, temperature control, and plumbed-in water line. Aside from the occasional thunderous rumble from the pump, it runs like a dream.

So how did my experiment go? Did I improve the design, cup by cup, until I had reached Van Gogh levels of artistry? Not exactly. I’d compare it more to garage sale art with an occasional Jackson Pollock. And despite doing the exact same thing every time — well, as close to exact as I could get — the results were wildly inconsistent. You can see for yourself if you want. I just uploaded the photos for all the world’s praise and ridicule on a web page I created.

p.s. Suddenly it occurs to me that I should be doing what the kids do whenever they want to learn something new: Check it out on YouTube!

Of all my character flaws, the one that bothers me the most is the way I easily succumb to inertia. Sometimes, I tell myself, this inertia isn’t so bad. Routine and ritual can be healthy, right? When I find something … Continue reading →

Posted in friends and neighbors | 2 Comments

Some people have a hard time getting rid of things in their houses or apartments. Some people let their email inboxes pile up. One such person, whom I know and love dearly, has both of those problems—with hundreds if not … Continue reading →

Like most technology-addled people these days, and especially those who share the burden of AD(H)D, I find my mind flits around a forest of ideas without ever alighting on a single branch. Still, occasionally something seems so compelling, whether attractive … Continue reading →

Sometimes it’s hard to let go. For a few years after I stopped teaching English, I kept a section of this site dedicated to writing-related topics. Somehow, people from all over the world found what I had written and started … Continue reading →

Take a Stanza — The Windhover

When I first read this poem back in college, I loved it so much that I committed it to memory. It’s funny to think I had time to do things like that back then. And I’m glad I did, because … Continue reading →

A few years ago while spelunking in my mother’s basement, looking for long-forgotten family treasure, I came across a stack of photocopied newspaper articles from the 1980s fastened together by a rusty paperclip. The articles, both fascinating and horrifying, reported … Continue reading →

As I headed out to the gym the other day, with my progressive-lens glasses, high-tech crutches, and stormtrooper stabilizing boot, it occurred to me that I looked a little like a cyborg—which got me thinking about my friend Sara Hendren … Continue reading →

Last week I went with some friends to an improv show. For one of the segments, the improv group had to act out a fairy tale suggested by a member of the audience—Little Red Riding Hood—in increasingly shorter time spans. … Continue reading →

Grand River, Then and Now

Two years ago Grand Rapids, Michigan, experienced its worst flooding in over 100 years. The Grand River, which runs alongside the downtown business district, swelled to dangerous levels, flooding nearby offices, submerging some homes up to their roof lines, and … Continue reading →